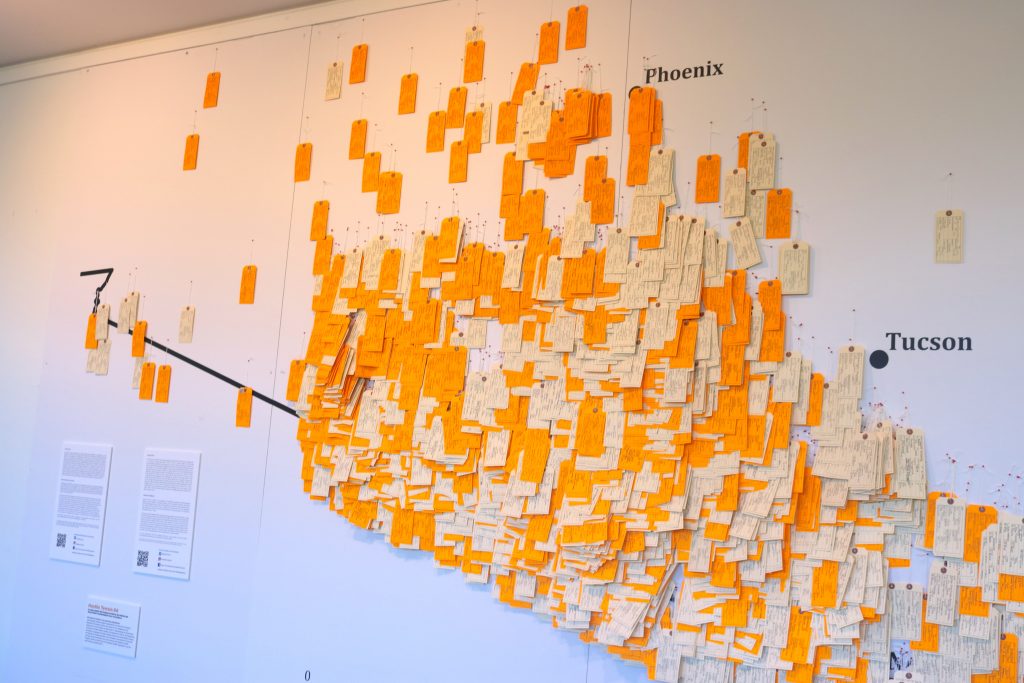 Since the 1990s, over 3,200 people have died while crossing the Sonoran Desert between Mexico and Arizona. On Oct. 5, a participatory art display debuted in the Grand Corridor of the Fine Arts Building to bring attention to this fact.

Hostile Terrain 94 (HT94) is an art display consisting of over 3,200 toe tags that were handwritten to represent the migrants who have died crossing the Sonoran Desert. Students were encouraged to participate during the last days of September by going to the Memorial Garden in Fine Arts where a table was set up with color-coded tags that they could fill out with the age, sex, cause of death, condition and location of bodies found across the desert.

Ana Sanchez-Bachman, a second-year doctoral student studying anthropology, helped the anthropology department at BU set up HT94 on campus and said she hopes the project will bring awareness of the situation on the border to more people.

“It’s one thing to talk to people and say, ‘Well, you know over 3,000 people have died,’ and it’s another thing to show them, having them look at these people’s names, how they died and understand that they aren’t just data points,” Sanchez-Bachman said. “They are real people who have been impacted by real government policy. Hopefully, the more people who are aware of this issue will mean more people will be engaged and help advocate for reforms that make less people die.”

HT94 was developed by the Undocumented Migration Project (UMP), a nonprofit anthropological analysis project that began in 2009 to examine border crossings between Northern Mexico and Southern Arizona directed by Jason De Leon, an anthropology professor at UCLA. UMP has worked with data provided by forensic anthropologists working with the Pima County Office of the Medical Examiner in Arizona and Humane Borders Inc. to collect the information and location of individuals who died crossing the Sonoran Desert. This fall, these tags will be on display simultaneously at 94 institutions globally.

The “94” in HT94 is meant to represent a set of immigration enforcement policies implemented by the United States Border Patrol in 1994. The policies, known as “prevention through deterrence,” was meant to discourage migrants from crossing the United States and Mexico border by blocking urban ports that were frequently used as points of entry into the United States with walls. Instead, it has prompted migrants to take more dangerous routes, such as the Sonoran Desert, where many have died from dehydration, hypothermia and heatstroke while making the journey.

Randall McGuire, distinguished professor of anthropology, spoke about the consequences of “prevention through deterrence” during a panel discussion for the exhibit and said that these policies forced people to enter deadly regions.

“If your feet become blistered, then you get left behind,” McGuire said. “And if you’ve been left behind, one of two things can happen. Either the border control or a humanitarian group can pick you up or you die.”

According to the United States Customs and Border Protection, 350 miles of wall have been built since President Donald Trump’s term began in 2016. According to the Department of Homeland Security, the full construction would cost an estimated $21 billion. McGuire said the walls have made deaths along the border more prevalent.

“The only thing we know that the wall does for sure is increase injury and death,” McGuire said.

Max Pensky, co-director of the Institute of Genocide and Mass Atrocity Prevention (I-GMAP) and a professor of philosophy at BU, said the border is becoming a potential site for mass atrocity as the Trump administration has focused on the criminalization of immigration which he referred to as “crimmigration law.”

“Using legal means to wage war against vulnerable populations, and there are very few populations more vulnerable than undocumented migrants, is an extraordinarily powerful and dire warning sign of worse to come,” Pensky said.

McGuire said that while the display accounts for 3,200 deaths, there are still more people that remain unaccounted for.

“The numbers we get for the number of people dying are low,” McGuire said. “They are underestimates. The average for the border patrol statistics over the last five years are over 300 a year [and] that number is probably more like 600 or 1,000. So one thing we should think about as we go home today is that as we’re sitting here, talking on a Zoom meeting, somebody is dying in the Sonoran Desert.” 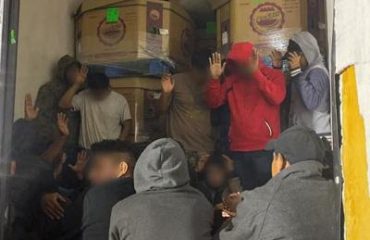 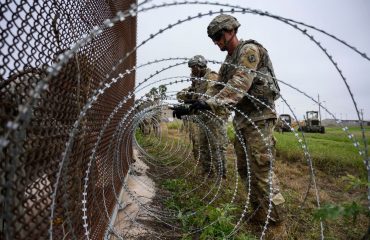