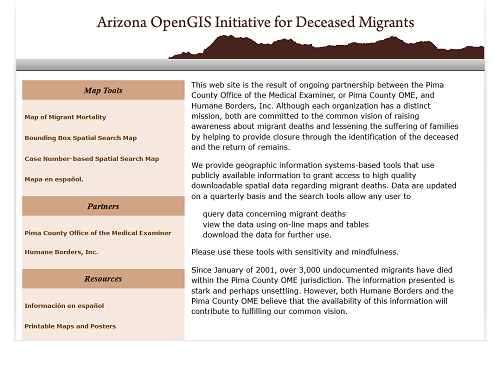 In partnership with the Pima County Medical Examiner’s Office, we have created an updated migrant death map, formally known as the Arizona OpenGIS Initiative for Deceased Migrants. The map is searchable. Viewers may see the exact location where each migrant body has been found, along other information, such as the name and gender of the deceased (if known and if the family has been notified), date of discovery, and cause of death.

Medical examiners in Pima and Maricopa Counties determine which recovered remains are Undocumented Border Crossers (deceased migrants.) Arizona's border with Mexico is approximately 400 miles long, and migrants' remains have been discovered as far as 75 miles north of Arizona's border with Mexico. Due to the vastness of the territory and the millions of acres of desolate desert that migrants traverse, the sad reality is that a substantial percentage of human remains will never be recovered. It's especially heartrending to note that, according to medical examiners, as of December 31, 2018, over 1000 decedents remain unidentified.

Lastly, we would have readers understand that many sets of human remains most recently recovered are in fact those of persons who died in the desert anywhere from a year to many years ago. The answer to the question of the age of human remains can be viewed under the column "Post Mortem Interval" when looking at the data given with the "Map of Migrant Mortality."

Looking for a Missing Migrant?